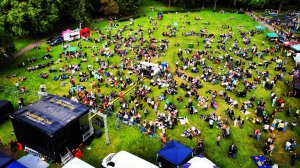 The Wettest and Windiest, but The Biggest and Best!

Wis-BEACH Rock Festival wows families in fun for all.

With predicted wet weather, and hundreds of frantic calls of "oh no. what will happen", the Festivals and Events Committee spent days reassuring the Wisbech community that the event would go ahead regardless, quoting the Glastonbury Festival as an example of determined festival goers in wellies and hoods.

On Sunday 8 August, stewards completed the setup of activities and logistical safety measures. The first stallholders arrived at 8am, then the Mayor's charity chair dunk was erected, followed by the first visitors who were armed with chairs, umbrellas and stamina! Firmly placing themselves close to the main stage, it was not long before other crowds were surrounding them, each claiming a small patch of grass for the day, pre-armed with blankets and pop up tents.

At 11am, to a rapturous welcome for Wisbech Mayor, Councillor Andrew Lynn's announcement that the festival was now starting, both main stage and local stage commenced the day's musical line-up, with The Brink and Roy McManus enthralling the welcoming festival goers. Onwards, on the main stage, band and after band were expertly looked after and coordinated by Stage Manager, Ian Larkin, from Remarkable Entertainment. There followed Light Skies Darken, Two Cats n Payne, Toadfish Bone, Matt McChlery, The Old Time Sailors, Lizzie Bryant, Lexie Green, Kill Me Kate, The John Noakes Experience, Dave Benning, Walkway, AKA, Sweden, Slava B, Blondied and headliners, Slade, whipped the crowd into a frenzy of excitement with some of their biggest hits.

The area set aside for children and families was bustling with excited laughs as sandcastles were built and an array of fairground rides invited children to relax and enjoy the sun, and rain.

The Mayor and Councillor Sam Hoy volunteered to sit on the dunk chair, and thanks to Wisbech in Bloom's generous offer of their water bowser, balloons were quickly filled to burst over the targets' heads.

Chairman of the Festivals and Events Committee, Councillor Sam Hoy commented, "It was a really great day and it was nice to see so many people come and have a great time. Thanks so much to everyone that made this event possible".

Fenland Fire Appliances came up trumps by loaning the Town Council the necessary fire extinguishers for various areas around the park and Total Solutions provided pre, during and post event support which the Town Council were truly grateful for.

After the event closed, councillors and volunteers' work had not yet finished as they set about clearing litter and dismantling festival props.

The Wisbech Rock Festival goes from strength to strength. Roll on 2022!