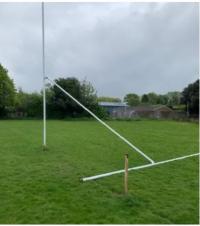 After a second vandalism attack in as many months, a local rugby club, the WRFC, has been awarded a grant of £320 to assist in making good the necessary repairs to damaged posts. The Club had spent money on quick drying cement, metal fixings, the hire of a welder, and acetylene kits which made a major dent in the Club's finances.

Councillor Peter Human heard of the damage and approached the Club Secretary inviting him to submit an application for financial support, which was approved under powers delegated to the Town Clerk (exercised following consultation with relevant councillors) on 6 July.

Club Secretary, Dave Dobson said, "The Club is grateful for the concern shown and support offered by Wisbech Town Council."