Mayor Making - a fresh way of doing it! 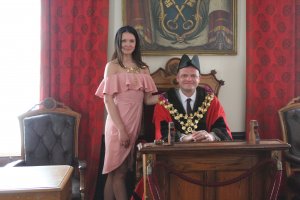 Welcome from the 2020/21 Mayor of Wisbech, Cllr Aigars Balsevics

Wisbech Town Council's Annual Meeting took place this evening, Monday 18 May and, for the first time, the event was held remotely, via the #Zoom video conferencing system.

Cllr Aigars Balsevics, nominated by Cllr Susan Woolwork and seconded by Cllr David Topgood was duly elected as the Chairman and Town Mayor. His oath was recorded as follows:

"I, Aigars Balsevics, having been elected to the office of Town Mayor of Wisbech, declare, that I take that office upon myself, and will duly and faithfully fulfil the duties of it, according to the best of my judgment and ability." Mayor Balsevics continued, "I am deeply conscious of the honour that my fellow Town Councillors have paid me in electing me to serve as Chairman and Mayor. It will be my endeavour to give my undivided loyalty to Wisbech Town Council, and to the town of Wisbech, 'Capital of the Fens', throughout this municipal year. Thank you".

I would also like to add that I, my fellow councillors and staff at Wisbech Town Council would like to express our immense sadness at the deaths of people from Covid-19, coupled with heartfelt condolences to the bereaved. Our thoughts are with those who are laid low by the virus and we would like to send thanks to all those involved in their treatment, in work that keeps our country going and those who are undertaking research to find a cure and inoculations."

Then, outgoing Mayor, Cllr Michael Hill, stepped down to allow new Mayor, Cllr Aigars Balvesics, to step up to his new role,

Cllr Andrew Lynn, nominated by Cllr Samantha Hoy and seconded by Cllr Ben Prest, was duly elected as the Vice-Chairman and Deputy Town Mayor for the municipal year 2020/21. He then stated his oath, "I am deeply conscious of the honour that you have paid in electing me as your Deputy Town Mayor. It will be my ambition, Mr Mayor, to give you my undivided loyalty and support throughout this municipal year."

Both Mayor Cllr Aigars Balsevics and Deputy Mayor Cllr Andrew Lynn attended the Mayor's Parlour to receive their official gowns, hats and chains of office by their wives to adhere to social distancing guidance.

Retiring Mayor, Cllr Michael Hill said, "Congratulations to you, Cllr Aigars Balsevics, on becoming Mayor of Wisbech Town; I will give you my full support in your year as Mayor. I would also like to thank you for taking over my duties last July during the Rose Fair when I had to undergo a hip replacement following a nasty fall down some stairs. Over my Mayoral year, and before my term was cut short by the Covid-19 restrictions of movement, I attended a total of 114 civic visits, travelling a total distance of 3,460 miles!"