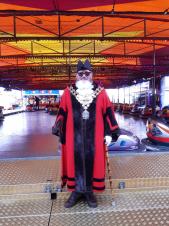 The Mayor of Wisbech, Cllr Michael Hill, was very pleased to be invited by The Mayor of King's Lynn and West Norfolk, Cllr Geoffrey Hipperson to attend the traditional opening ceremony of the King's Lynn Mart on Friday 14 February. After the ceremony, the Mayor and other invited guests had the opportunity to tour the Mart.

Wisbech Chapel Road Car Park will be the next stop in the Mart's journey opening for business on Friday 28 February until Saturday 7 March. There will also be a small number of rides and stalls in the Wisbech Town Marketplace for the duration of their stay.